I’m in love with a girl named Emily. Okay, she’s hardly a girl; she’s a widow and mother “of a certain age” (mid-sixties) who lives in New Jersey, where she grows geraniums, belongs to a garden club, wears outrageous hats, and longs for adventure. She also practices karate and occasionally works as a field operative for the CIA. The world knows her as Mrs. Pollifax, and—judging from book sales—the world loves her every bit as much as I do.

My late mom was slavishly devoted to Dorothy Gilman’s popular series of “cozy thrillers” or “thrilling cozies” or whatever the name is for the category Gilman invented here. When I was working at Murder Ink®, I always had to hand-deliver a copy of the latest Pollifax to Mom’s apartment as soon as we took it out of the box from the publisher. Mom’s other obsessions through the years included Ian Fleming, Helen MacInnes, John D. MacDonald, Mary Stewart, Robert Ludlum, and Elizabeth Peters, all of whom I also loved, but it never even occurred to me to read a Mrs. Pollifax novel. They just looked a bit too precious for me. (Another of Mom’s obsessions was Lilian Jackson Braun, and I draw the line at mysteries involving small, furry animals.) So I sold countless copies of Gilman’s books for 20+ years but never read one.

Until now. In the last few months, I’ve read the entire series of 14 books, in order, beginning with THE UNEXPECTED MRS. POLLIFAX (1966) and ending with MRS. POLLIFAX UNVEILED (2000). I was pleasantly surprised to find that I loved them. 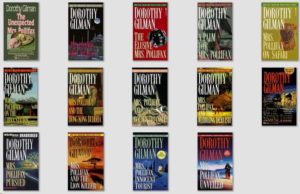 What changed my mind about reading these books? Well, my own readers. Last year I published a novel I intended as a stand-alone, Mrs. John Doe. It’s about Nora Baron, a Long Island wife, mother, actor, and college drama teacher who inadvertently becomes involved in her husband’s profession—the CIA. During an increasingly dangerous adventure in England and France, Nora becomes an honorary secret agent. The novel proved to be popular, and my editor at Penguin Random House asked if I’d be willing to make it a series. I had several ideas for future Nora Baron adventures, and yet I hesitated. 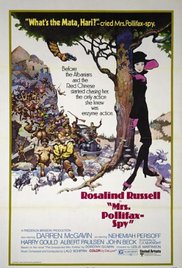 I wrote a second Nora novel, The Woman Who Knew Too Much, but I still wasn’t sure. I don’t usually pay attention to customer reviews on Amazon, Barnes & Noble, etc., but I needed to know how readers were responding to Nora Baron in order to decide whether to commit myself to a series. I read the comments for MRS. JOHN DOE, and I noticed that every other review mentioned Mrs. Pollifax. “Reminds me of…” “Not since…” “If you like Mrs. P, you’ll like Mrs. B.” So there I was, reminding mystery fans of an iconic character I’d never met. That’s when I bought the first book in Gilman’s series. As soon as I finished reading it, I bought all the others. 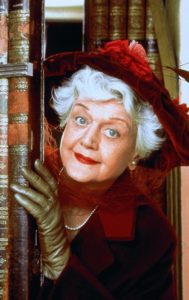 First things first: I am not in MWA Grand Master Dorothy Gilman’s league, and Nora Baron is hardly the immortal Mrs. Pollifax. Still, I could see what readers meant when they compared the two characters: upbeat, adventurous women “of a certain age” (Nora is fiftyish) with a natural talent for espionage and detection. They both have colorful friends and nefarious enemies, and their adventures occur in exotic foreign places. Both women are also that most outdated of things: left-wing patriots. Despite their liberal political views, they will fight to the death for the USA—don’t even try to change their minds about that. Nora is somewhat younger, but I can’t say she’s more “hip” because one of the “unexpected” things about Mrs. Pollifax is her surprising hipness. The two women are definitely similar.

Now, if I only had Gilman’s genius! I just read all 14 books, and they’re all true to her unique formula. Each Pollifax adventure is a delight, beautifully written and consistently exciting. Her sense of place is as keen as her knowledge of human nature. The “cutesy” aspects I initially feared are nonexistent—the stories are considerably more realistic and somewhat darker than I expected. As for Emily Pollifax, we never once laugh at this brave, sensible, warmhearted lady, her silly hats notwithstanding. We always laugh with her—and that’s the true test of a great character.