Happy New Year! I wish everyone a happy, healthy, and productive 2013. I’m getting an early start on it, myself–I’m finishing up a new novel, planning the next one, and working to get the rest of my backlist available as e-books before the next New Year’s Eve is upon us. And, in what has become an annual tradition, a few close friends and I saw in the new year together here in NYC, not in Times Square (ugh!) but in a movie theater, followed by dinner at a favorite Greenwich Village restaurant. The dinner was great, the movie…not so much. Our pick this year was SKYFALL, the new James Bond movie, and I must say I was a bit underwhelmed.

What on earth has become of my beloved James Bond? I’ve been going to the films in this franchise ever since it became a franchise, back in the 1960s. My first theatrical Bond experience was YOU ONLY LIVE TWICE (1967), and later that year Santa brought me an official James Bond 007 Attaché Case and the Matchbox Cars edition of the famous gold Aston Martin (with working ejector seat and a little plastic bad guy who could actually be ejected and hurled across my bedroom–waayyy cool!). I’ve seen every Bond film since that in a theater, and I’m now the proud owner of the Complete Works on DVD. I arrived at the theater the other night with the highest expectations, having read all the glowing reviews of the major film critics. 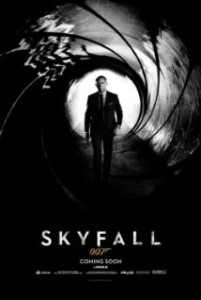 What I saw on the screen was a film best described as routine when compared to the complete body of work (23 films and counting). The plot, such as it is, is meh (a cobbled-together rehash of 1995’s GOLDENEYE and 1999’s THE WORLD IS NOT ENOUGH, wherein a loony former 00-agent is exacting revenge against Bond and “M” for perceived betrayals), and Daniel Craig is already beginning to look a bit tired in the iconic central róle. The action scenes are okay-I-guess, there are a few fairly good jokes and a couple of reasonably pretty women, Javier Bardem is an amusingly campy villain, and Judi Dench supplies her usual solid support as “M.” But here’s the thing: SKYFALL is 2 hours and 23 minutes long, and now, a mere two days later, I don’t remember a single moment of it. Okay, I remember one moment, the only genuinely delightful thrill in the whole thing; the sudden, unexpected but entirely welcome reappearance of that famous Aston Martin. (I love that car!) But when an automobile actually manages to upstage action, scenery, Bond girls, Bond himself, and 4 Oscar-caliber guest stars (Dench, Bardem, and Ralph Fiennes and Albert Finney, who briefly show up), there’s something wrong at MI6.

The overenthusiastic critics are praising Oscar-winning director Sam Mendes (AMERICAN BEAUTY, etc.) for “revitalizing” the franchise, but I’m damned if I know what they mean by that. As far as I can see, everything vital about the 007 films is missing from this current installment. It is remarkably lacking in vitality of any kind. It just sits there, all ten tons of it, expensive and gleaming, all dressed up with nowhere to go. Even the disappointing previous chapter, 2008’s QUANTUM OF SOLACE, looks positively lively in comparison to this one.

I was very disappointed, but I’ll get over it. There’s always a next one to look forward to, and I sincerely hope that next one is back on track. This series needs thrills–fast cars, outlandish action scenes, gizmos and gadgets and girls–to keep it going. But for now, poor old Bond is a spy who’s still out in the cold.