I just saw the new film version of Patricia Highsmith’s wonderful 1964 novel, The Two Faces of January, and I’m happy to report that it’s very good. Screenwriter Hossein Amini (Drive) always dreamed of writing a film adaptation of the novel, and he finally realized that dream. He also ended up directing it, and it’s an auspicious directorial début. The movie stars Viggo Mortensen, Kirsten Dunst, and Oscar Isaac, and it was filmed on locations in Athens, Crete, and Istanbul. 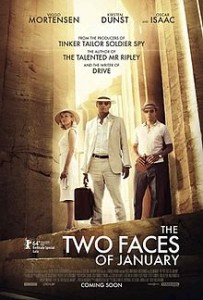 Athens, 1962: A young American slacker, Rydal (Isaac), acts as a tour guide, living on the tips and spare cash he cons out of unwary foreigners. He meets Chester and Colette, an older American businessman (Mortensen) and his beautiful young wife (Dunst), and offers to show them around. He soon helps them out of a jam. Chester is really a major fraudster who’s escaped the law (and his creditors) by fleeing to Europe, and a detective tracks him to his hotel. Chester accidentally kills the detective, and now he and Colette must get out of Athens fast. Rydal, who’s very attracted to Colette, takes them to Crete, where he arranges for false papers to conceal their tracks. When the body in Athens is discovered, a nationwide search begins, and the three find themselves stuck together. Chester doesn’t like the growing relationship he sees between his wife and the handsome young man, and we already know he’s capable of violence. From there, the plot evolves into a modern version of a Greek drama among the splendid ancient ruins. 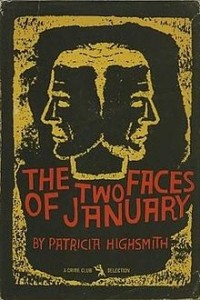 I recently reread Highsmith’s novel, so it was fresh in my mind when I watched the film. Amini made a few changes in the story, streamlining the plot and losing several minor characters and events. The result is quite good, if not fully as satisfying as the novel. The tricky relationship between the two men (there’s a father-son thing going on) isn’t captured as well in the film as it is in the book, but you get the gist of it. The three stars are excellent, though Dunst is largely wasted in her thankless role as the Love Object. Still, Amini manages to capture the peculiar, oppressive Highsmith atmosphere that her fans (including me) are so wild about. The production values are first-rate, with lots of gorgeous scenery, including the Acropolis, the temple of Knossos at Iraklion in Crete (where a murder occurs), and Istanbul’s sinister Grand Bazaar (for a chase and shootout in the dead of night). All in all, it ranks high on my list of Highsmith film adaptations, not as good as the best ones (Strangers on a Train, Purple Noon, The Talented Mr. Ripley) but better than most of the others (Ripley’s Game and both film versions of The Cry of the Owl).

If you’re a Highsmith Head like me, you’ll want to check out this new movie. It opens in American theaters in late September, or you can rent/stream it right now from Amazon, Time Warner On Demand, etc. And you really should read the book–it’s terrific.