It’s no secret that Alfred Hitchcock is my favorite film director, but even I don’t love him as much as his fellow film directors love him. Hollywood has always been famous for following trends and jumping on bandwagons, but rarely has the imitating been more explicit than the long, venerable line of homages to Hitchcock by some of our finest filmmakers. Why would so many directors, already famous in their own rights, want to recreate the moods and themes–and, in some cases, the plots and characters–of another artist? My best theory is that it enables them to study the Master, as many painters will sometimes reproduce masterworks of art in order to learn about balance and brushstrokes and so forth. For whatever reason, the tributes to Hitchcock have been with us for a long time, and now the word “Hitchcockian” is part of our language. If you’re not sure what “Hitchcockian” means, check out these 12 films.

There are many others, of course; I simply picked my personal favorites in this fascinating sub-genre that were released between 1963 and 2006. I’ve omitted some obvious titles, such as Gus Van Sant’s ill-advised, frame-by-frame “recreation” of PSYCHO (1998). In fact, I’ve omitted all official remakes, including 1998’s A PERFECT MURDER, a twisty update of DIAL M FOR MURDER that may just be better than the original. You won’t find the slavish (and not very good) “borrowings” of Brian de Palma (OBSESSION, DRESSED TO KILL, BLOW-OUT, BODY DOUBLE, etc.), not to mention the notorious BASIC INSTINCT (another clunky, oddly unsatisfying tribute by Paul Verhoeven–check out his Dutch thriller, THE FOURTH MAN, instead). And JAGGED EDGE (1986) is essentially a remake of Hitch’s THE PARADINE CASE with a gender role reversal, with Glenn Close playing Gregory Peck’s part and Jeff Bridges standing in for Alida Valli, so I skipped it, too. (Side note: The late, remarkably untalented, inexplicably successful Joe Eszterhas wrote both JAGGED EDGE and BASIC INSTINCT, two dreary Hitch ripoffs that predicted the quality–and repulsive sexual excess–of his world-famous stinker, SHOWGIRLS. I prefer to leave him out of any serious discussion of the film medium.)

These 12 films are of varying success and popularity; what ties them together is the sheer love each director displays for his inspiration, and my sheer love of watching them. So, here they are:

1) CHARADE (Stanley Donen, 1963): Cary Grant (Hitch’s second-favorite leading man, after James Stewart) and the enchanting (and very well-dressed) Audrey Hepburn in a Parisian thriller that was described by one critic as “the best Hitchcock movie not made by Hitchcock.” I tend to agree. The mix of thrills and humor is pure AH. Walter Matthau, James Coburn, George Kennedy, and Henry Mancini’s famous musical score add to the fun. A must-see film.

2) PLAY MISTY FOR ME (Clint Eastwood, 1971): Eastwood’s début behind the camera is a tense, ahead-of-its-time story of an easygoing radio disc-jockey (Clint) and the beautiful but disturbed fan (Jessica Walter) who obsesses on him in increasingly violent ways. The obvious inspiration for 1987’s FATAL ATTRACTION (which I’ve omitted for this reason), MISTY is better than that slick smash-hit in just about every department.

3) NIGHT WATCH (Brian G. Hutton, 1973): The film version of the Broadway play by Lucille Fletcher (SORRY, WRONG NUMBER) involves a troubled rich woman (Elizabeth Taylor), suspicious of her husband (Laurence Harvey) and her best friend (Billie Whitelaw). She’s verrrry nervous, and she may or may not be seeing things–like a murder in the empty house next door. Is she crazy? Or are her loved ones deliberately trying to drive her mad? Director Hutton (WHERE EAGLES DARE) really nails the atmosphere in this chic, London-set psychological mystery, and Taylor is terrific.

4) LAST EMBRACE (Jonathan Demme, 1979): A grieving former CIA agent (Roy Scheider), whose wife was killed by a bullet meant for him, goes looking for the killers and finds a very creepy mystery involving an enigmatic woman (Janet Margolin) and a charming, elderly private eye (Sam Levene). Soon he’s on the run in classic Hitch fashion, in a series of calamities and near-misses that culminates in a tense face-off at a national monument (Niagara Falls, not Mount Rushmore). An early film by Demme, who would go on to make THE SILENCE OF THE LAMBS, among others. If you don’t think this movie is a deliberate tribute to AH, check out the scene in the bell tower! 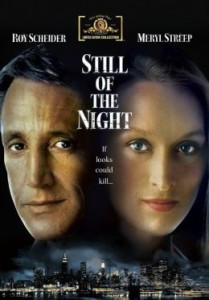 5) STILL OF THE NIGHT (Robert Benton, 1982): Fresh from his Oscar-winning triumph with KRAMER VS. KRAMER, Benton mounted this beautiful, NYC-set mystery involving a psychiatrist (Roy Scheider, again) who’s thrust into a life-threatening situation when one of his patients is murdered. He knew all the man’s secrets–perhaps too many of them–and now he’s falling in love with the man’s mysterious mistress (Meryl Streep), who may or may not be the killer! Visually perfect, with several pure “Hitch” sequences and a sly performance by young Streep that recalls all those icy blondes in the Master’s movies (check out her stunning, 5-minute, extreme-closeup monologue near the end). And Hitchcock vet Jessica Tandy (THE BIRDS) is along for the ride, too, as Scheider’s concerned mom. I love this movie.

6) BLACK WIDOW (Bob Rafelson, 1987): Rafelson directed one of my all-time fave films, FIVE EASY PIECES. Here, he really changes pace from his usual realistic millieu, giving us a very stylish, stylized cat-and-mouse game between a frazzled federal investigator and a cunning serial killer. The twist: they’re both women! Debra Winger (as the Fed) and Theresa Russell (as the loony tune) seem to be having a lot of fun in their broad, old-fashioned “movie star” performances, and Rafelson makes it all work beautifully. 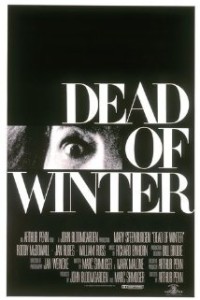 7) DEAD OF WINTER (Arthur Penn, 1987): An old, dark house. A snowstorm. An innocent young actress (Mary Steenburgen), lured to this remote place for a mysterious acting job by a kindly old doctor (Jan Rubes) and his creepy sidekick (Roddy McDowall). Old crimes, double-crosses, switched identities, madness, and murder ensue. Penn is another New Wave director (BONNIE AND CLYDE, etc.) who obviously couldn’t resist the chance to make at least one stylish, old-school thriller for the sheer fun of it. This film is based on a wonderful “B-movie” from 1946 called MY NAME IS JULIA ROSS, and it’s a real sleeper, the best Hitchcock homage you’ve probably never heard of. Try it.

8) THE BEDROOM WINDOW (Curtis Hanson, 1987): 1987 was a banner year for Hitchcock tributes, and this is the third one that really scores. Before he set the world on fire with L. A. CONFIDENTIAL, Hanson gave us this deliberate rehash of REAR WINDOW involving a confused Everyman (Steve Guttenberg) with not one but two mysterious beauties (Elizabeth McGovern and Isabelle Huppert). When the married Huppert sees the attempted murder of McGovern from her lover Guttenberg’s bedroom window during an illicit tryst, she can’t report it to the police for obvious reasons. But he can report it, pretending to have seen the assault he never saw. Of course, the authorities don’t believe him–but the killer does. Creepy fun.

9) MASQUERADE (Bob Swaim, 1988): Another direct “borrowing” of a Hitchcock story. This one is clearly based on SUSPICION, complete with a beautiful heiress (Meg Tilly, standing in for Oscar-winner Joan Fontaine), a suave fortune hunter (Rob Lowe, not as successful in recreating the Cary Grant part), and several other suspicious types getting involved in the plot (including early performances by Kim Cattrall and Dana Delany). Set among the very rich in NYC and East Hampton–and with those three stunning women aboard–this may be the most scenic of the tributes on this list. 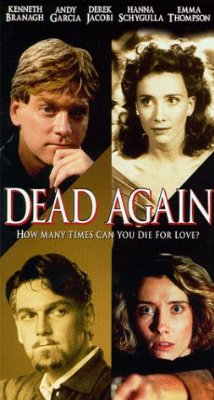 10) DEAD AGAIN (Kenneth Branagh, 1991): An odd one, but fascinating. Branagh takes the plots of at least 5 Hitch films (REBECCA, SUSPICION, and SPELLBOUND chief among them) and throws them in a blender. The result is a very entertaining double mystery about an old 1940s murder involving Branagh’s intense music composer and Emma Thompson’s beautiful pianist, contrasted with a modern (1990) plot involving an L. A. gumshoe (Branagh) and a mysterious amnesia victim (Thompson)…who may or may not be reincarnations of the earlier people! Two mysteries, two periods, dual roles for the stars, hypnotism, past-life regression, and Robin WIlliams as a crackpot former psychiatrist who now works (and consults) in a supermarket freezer (I’m not making this up). What more could you want? How about Sir Derek Jacobi and the great German actress, Hanna Schygulla, as mysterious bystanders? You really have to see this!

11) FINAL ANALYSIS (Phil Joanou, 1992): Another direct steal, this one from SPELLBOUND. A handsome psychiatrist (Richard Gere) gets romantically involved with the married sister (Kim Basinger) of his troubled client (Uma Thurman). When he learns that his lover’s husband is a sadistic mobster (Eric Roberts), it becomes clear that he’s being set up for something. But what? Thurman’s recurring dream may hold the key to the mystery (just like the Salvador Dali-designed recurring dream in SPELLBOUND). The actors provide all the fun here, particularly the two girls, and it all ends up atop a shaky lighthouse in a violent rainstorm. Make popcorn, sit back, and enjoy. 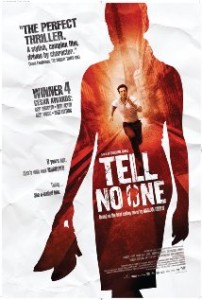 12) TELL NO ONE (Guillaume Canet, 2006): Last but not least, a recent French film that gets everything right in the Hitchcock department. This exciting man-on-the-run thriller recalls everything from THE 39 STEPS to NORTH BY NORTHWEST to FRENZY–and it’s nearly as good, too. The wonderful Francois Cluzet stands in for Donat/Grant/Finch/etc., running like crazy all over Paris (he did all his own stunts!) looking for the truth behind the death–and possible resurrection–of his wife. Based on the nifty novel by American author Harlan Coben, this French translation loses none of the suspense. A real winner.

These 12 titles are in my permanent DVD library, and they’re all downloadable from Netflix, Amazon, etc. If you’re as big a Hitchcock fan as I am, or even if you’re just looking for a good thrill or two, check them out. Have fun!

2 thoughts on “The sincerest form of flattery: 12 Hitchcock homages”