That big man, Bill Howard’s chauffeur. Three whispered words: Be careful, Pal. How could a complete stranger possibly know about that? The car accident with no police record. The death of “John Doe.” The body lying in the morgue with a long history of health problems. A gold locket on a gold chain: Always keep me close to your heart . . .

Nora Baron stood before the fountain in Russell Square Gardens, Bloomsbury, Camden, London, England. She stared out at the dark lawn, not seeing it, possessed by a sudden panic. The fog had arrived in earnest now, swirling before her eyes, the icy tendrils clinging to everything. She could feel it, cold against her face. The trees, the lawns, the great Victorian hotel across that road, the great museum across that other one; she couldn’t see them now. She was aware only of a rhythmic pounding sound somewhere behind her, and it seemed to be coming closer. 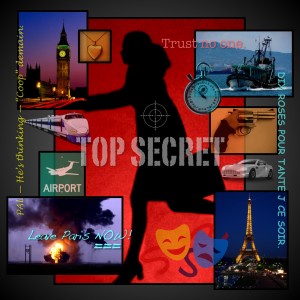 She blinked and looked around her, peering through the mist. The sweet old lady with the big dog; the teenage lovers; the jogger with the phone; the nanny getting up from the bench, calling the little twin girls to her as she buttoned her coat. It was time to go. It was time to take these children home while they could still see their hands in front of their faces. It was time to be careful.

Nora heard the little girl scream a split second before she felt the hard impact in the center of her back. Then she was lurching forward, flying through the air, through the blinding fog, and crashing heavily down onto the wet pavement.

That was an excerpt from my new novel, Mrs. John Doe, the final paragraphs of Chapter 4. It’s the lead-in to the first action sequence in the story, and it takes place in a small park in London. My protagonist, Nora Baron, has just arrived in England from her home in New York to identify the body of her husband, Jeff, who was apparently killed in a car accident on a business trip to the UK. At the morgue, Nora is handed a manila envelope containing Jeff’s personal effects, which she places in her purse. On the way back to her hotel, she wanders into Russell Square Gardens. It is dusk, and the fog is rolling in. She arrives at the fountain in the center of the park, lost in thought, when she hears running footsteps approaching her from behind…

Quite a few people have asked me about this particular setting in the story. Unless you live in London or spend a lot of time there, you might not be familiar with it. To help me write the scene, I used a stunning 360° camera pan of the park that I found on the Panoramic Earth website. The shot was taken from the exact center, by the fountain where Nora is assaulted and her purse is stolen. It’s full daylight in the picture, so you have to imagine the same panorama at twilight in a thick fog. You can see it HERE.

Now you have a graphic visual to go with the scene. Happy reading!