Laura is the face in the misty light,
Footsteps that you hear down the hall,
The laugh that floats on a summer night
That you can never quite recall… 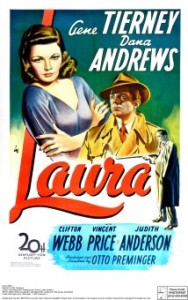 I just watched Laura again, for maybe the hundredth time. It’s one of my favorite films, and my DVD of it gets a workout at least once a year. Pauline Kael, the best film critic ever, called it “everybody’s favorite chic murder mystery.” Watching it this time, I tried to figure out why that is. What is it about this particular film that makes it so popular, and so memorable?

Well, for one thing, it’s beautiful. Otto Preminger’s 1944 film version of Vera Caspary’s bestselling novel is just gorgeous to look at, start to finish. Rarely have so many attractive people been placed in so many attractive settings, with so much brilliant dialogue and music. The Oscar-winning cinematography, the costumes–everything in this film is stunning. If they gave out Oscars for Best Looking, it would win, hands down. 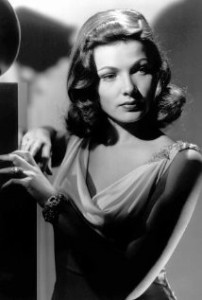 And so would its leading lady. Gene Tierney, in the title role, is one of those breathtaking women who can only be found in Hollywood. She’s unearthly, which fits the plot of the film perfectly. She was never a great actress, but she was a good one, and her unique presence–a mixture of sophistication and vulnerability with a sloe-eyed beauty and a husky voice–makes the whole thing work.

For the uninitiated: Laura is the story of a murder investigation. Laura Hunt (Tierney), a lovely young advertising editor in New York City’s posh Upper East Side, has been found dead in her apartment, her face destroyed by a shotgun blast at very close range. The tough, disillusioned police detective assigned to the case (Dana Andrews) interviews her friends and colleagues, looking for a likely suspect. And he finds several: the gigolo (Vincent Price) who was hoping to marry her for her money until he learned she was about to throw him over; her chic Park Avenue aunt (Judith Anderson), who’s in love with the gigolo and wanted him for herself; and the possessive celebrity columnist (Clifton Webb) who befriended her and helped her to become successful in her business. Any one of these people could have murdered her, but which one was it? Then, about halfway through the film, there’s a big surprise (which I won’t spoil) that leads to a tense, satisfying solution to the mystery. 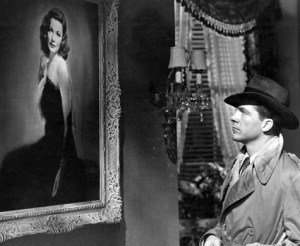 The most unusual aspect of the otherwise routine plot–the one that makes it memorable–is the slow-building reaction of the detective (and the viewer) to the dead woman. Each suspect tells him about her, and we see her in plenty of flashbacks. A portrait of her dominates her living room, the lingering scent of her perfume is in the air, and her favorite record is on her phonograph. Even in death, she’s everywhere. As he spends days (and nights) in her home, staring at the painting and listening to the haunting music (David Raksin’s famous title song), he gradually falls in love with her. And so do we. This elusive, enigmatic dead girl becomes the most vivid character in the story. We’re all in love with a ghost!

And you see Laura on the train that is passing through;
Those eyes, how familiar they seem!
She gave your very first kiss to you;
That was Laura—but she’s only a dream.

That’s it, right there; the reason I love this movie so much. Film noir always dealt with alienation–brooding emotions and unfulfilled passions in a shadowy world. And few noir films are quite as shadowy as this. The cause of all the darkness is not a fortune (The Asphalt Jungle) or a priceless statue (The Maltese Falcon) or even a manipulative femme fatale (Out Of The Past). Here, everyone’s obsessing over a girl who doesn’t even exist, who may never have existed as they remember her. The “prize” in this story is something truly unobtainable–or so we think. As in Hitchcock’s Vertigo (another all-time fave of mine), the hero is creating his own fantasy, his ideal love.

Maybe impossible fantasies make the most valuable prizes. They certainly make the best movies. If you doubt that, watch Laura. She’s perfect–but, as the title song reminds us, she’s only a dream.