I just read THE GIRL ON THE TRAIN, the big new bestseller in the mystery world, and I really admire it. Paula Hawkins has done an excellent job with her first crime novel, and she’s reaping big rewards: near-universal praise, the NY Times Bestseller List, a movie deal with Steven Spielberg. But her phenomenal success is coming at a price. 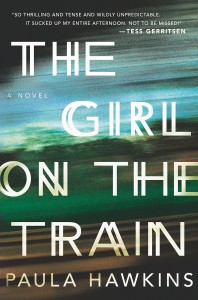 THE GIRL ON THE TRAIN is a dark tale of murder and madness, involving not one but three unreliable narrators. The main narrator, Rachel Watson, is a recently divorced, recently unemployed alcoholic (fired for drinking on the job). She is also a self-obsessed, self-pitying, compulsively nosy pathological liar whose health and hygiene are not all they should be. She forgets to bathe for days at a time, and she tends to black out and/or vomit in public places. Whenever the real world threatens her, she reaches for the bottle to wash it away. In other words, she’s a realistically drawn Rock Bottom Drunk. And that’s causing a problem: This alarming but hardly unusual woman is drawing most of the novel’s sharpest criticism. In many of the professional reviews in the media and amateur comments on Amazon, GoodReads, and Facebook, people are citing Rachel as the main element they don’t like about the book. Some of these critics go on to say that the novel’s violence and dark, downbeat tone are also turnoffs.

I don’t understand that.

I’ve been writing mystery stories for thirty years now, and I was a mystery bookseller here in New York City for most of that time, first at Foul Play Bookstore and then at Murder Ink®. I’ve come into contact with thousands of mystery readers–not merely as fans but as customers. They talked to me about what they like and don’t like in mystery novels. With all this experience, you’d think I’d know how to write a mystery that pleased and satisfied everyone. You’d be wrong. I’ve tried listening–really listening–to mystery readers, but after a while my head begins to spin.

Here are some of the most frequent comments I’ve heard from bookstore customers:

“I love murder stories, but I can’t stand reading about violence.”

“I love crime novels–I just don’t like reading about crime and criminals.”

“I love thrillers, but I need to have someone in the story I can root for.”

“I like a nice story with nice people in it.”

Ummm, okaaayyy. If that’s the case, I only have one question for you: Why are you reading mysteries?

By its very nature, murder is usually an ugly business enacted by ugly people. The crimesolvers who go after these people are frequently not much nicer than their quarry–flawed, damaged types who feel compelled to right wrongs, often for complex personal reasons. In a suspense thriller, you’ll typically have the predator and the prey, both of whom are motivated by greed, lust, revenge, survival, or plain old garden-variety craziness. Perfect champions are few and far between, and they’re usually women: Nancy Drew, Jane Marple, Jessica Fletcher. Most other female sleuths and virtually all of the men are not so pristine. Hell, even Sherlock Holmes and Hercule Poirot have their dark sides. Adam Dalgliesh, Easy Rawlins, Kinsey Millhone, John Rebus, Lydia Chin, and Alex Delaware have complicated, even messy lives. As for Harry Bosch, Lisbeth Salander, and Jack Reacher–well, it’s best to stay out of their way when they’re working. The amateur detectives run the gamut from light to dark, and Rachel Watson is admittedly one of the darkest.

Question: Why is this considered to be a bad thing by so many mystery readers?

This is the point where everyone jumps in with the usual observations:

“It takes all kinds.”

Ummm, okaaayyy. But that doesn’t answer my question. Crime novels with…only nice people in them? Sexy, violent thrillers with…no sex or violence? Murder mysteries with…no murders? What you’re asking for are realistic stories with no realism.

Sigmund Freud famously asked his eternal question: What do women want? Long ago, I adapted and altered that question for a question of my own: What do mystery readers want?

After all these years, I’m still waiting for an answer.

5 thoughts on “The Eternal Question: What Do Mystery Readers Want?”