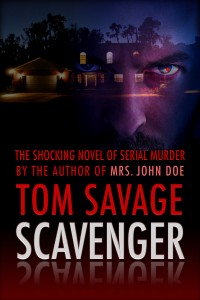 THE SHOCKING NOVEL OF SERIAL MURDER

Mark Stevenson has just published a bestselling novel inspired by “The Family Man,” a long-ago serial killer who murdered entire families all over America and left them posed in gruesome tableaus of holiday merriment, whose crimes were never solved. The book has garnered the New York author critical praise, financial success, a beautiful fiancée–and the macabre attention of a devoted fan.

He calls himself Scavenger, and he’s also obsessed with “The Family Man.” But he knows something that Mark doesn’t. He knows what really happened to the killer. He knows his identity. He knows why the killings stopped. He knows why they’ll begin again.

Now, Scavenger has devised a cunning little game, a scavenger hunt. He’s planted grisly clues at the scene of each original crime, clues that will eventually reveal the identity of “The Family Man.” And he wants Mark to come out and play.

In a novel that speeds from Manhattan to Washington DC to New Orleans, from Los Angeles to Chicago, to a final showdown in a decaying mansion in the dead of night, Tom Savage takes us on a terrifying journey into the darkest labyrinths of the mind. In Scavenger, he creates a chilling portrait of a human monster that will not be soon forgotten.

“Tom Savage is becoming a master of the high-speed thriller. Scavenger grabs you quickly and never lets go.” — MICHAEL CONNELLY

“Savage’s fourth thriller is a real winner. You’ll be tempted to cheat and read the ending halfway through. Fans of James Patterson will be delighted.” — LIBRARY JOURNAL

“A truly compelling novel. It’s rare to find such a combination of brilliant premise and finely honed writing. I’ll have to get even with Savage for keeping me awake half the night, reading this page-turner in one sitting. Great job!” — JEFFERY DEAVER 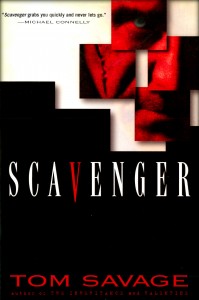 “A book that is filled with more than the usual number of fascinating twists. The plot is intricate and almost perfectly devised. The action is blurringly rapid and yet absolutely believable. This latest book by Tom Savage is the proof that he is one of the rising stars of the genre.” — BATON ROUGE MAGAZINE

“This is prime cat-and-mouse storytelling, written with clean elegance rather than prurient excess. Even the paragraphs devoted to the murderer’s mind are elevated above the ordinary, thanks to the author’s stylish touch. By keeping the game simple, the setting contained, and the plot almost exclusively linear, Savage is able to concentrate on the story at hand. He makes the most of it by milking suspense out of every page. Best of all, the inevitable logic of the surprising final pages is a welcome break from the overly complex endings plaguing otherwise good books these days. It’s the author of Scavenger who’s playing mind games–and you are his victim. But you’ll likely love every minute of it.” — WASHINGTON POST BOOK WORLD