We’re always talking about the moments that changed our lives, but how often is it true? I mean, how many profoundly life-altering experiences do we really have? A Facebook friend recently tagged me in one of those pop surveys—you know, “My 10 Favorite Mystery Novels” or “My 7 Worst Writing Habits” or “My 5 Favorite Brands of Peanut Butter.” Then you’re supposed to “tag” a bunch of Facebook friends and challenge them to answer it. Well, my fellow mystery writer and FB friend Dianne Emley “tagged” me to name the movie that stayed with me and inspired me over the years, and I didn’t even have to think about it. 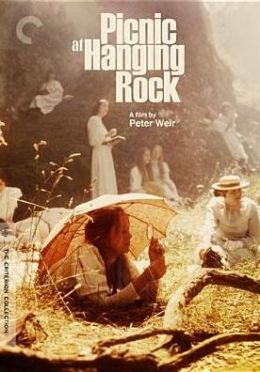 The movie that changed my life was PICNIC AT HANGING ROCK. I was 23 years old in 1978, when Peter Weir’s 1975 masterpiece arrived in America. I saw it in a theater here in NYC, and I was blown away. I’d gone to the movie alone because I couldn’t find anyone who wanted to go to an “arthouse” theater to see some Aussie movie about a bunch of schoolgirls in 1900. Afterward, I sat in a diner and thought about it. In the next few weeks, I returned to see it 3 more times, dragging reluctant friends with me each time. They got hooked, too. We all had long, long discussions about the film, trying to break it down and figure out what it meant. Now, almost 40 years later, I watch the DVD from time to time, and I’m still trying to figure it out.

Briefly, PICNIC AT HANGING ROCK is a suspense/mystery/horror movie (pick one or all) about the nature of reality. Based on Joan Lindsay’s stunning 1967 novel, it follows a group of post-Victorian schoolgirls at a prim-and-proper boarding school in the remote Australian Outback on Valentine’s Day, 1900. That’s the day they go for an outing at Hanging Rock, a nearby volcanic phenomenon, a mountain rising out of the flat plain with nothing around it for miles. So, the setting is already weird. What happens that day is even weirder. During the picnic, four girls go exploring on the mountain while the rest of the party remain at the base. Only one girl returns. One of the staid, buttoned-down lady teachers goes to look for the three missing girls, and she vanishes as well. A search is mounted involving local and national police, but no trace is ever found of the woman and the three girls. Various people become involved—and obsessed—with the case, notably the school’s rigid headmistress (Rachel Roberts), a sympathetic teacher (Helen Morse), a housemaid at the school (Jacki Weaver), and a rich young man who’s visiting relatives at a nearby estate (Dominic Guard). We follow the fallout through the experiences of these people and others. Then, miraculously, one of the missing girls is found—but she remembers nothing of her experience. She doesn’t know what happened to the others, and neither do we. It isn’t a standard “whodunit,” and there are no easy answers or explanations. Three people simply vanish from the face of the earth, never to be seen again, and we’re left with an unsolved—and unsolvable—mystery. Ultimately, the film asks the viewer a question: What happens to us when we are faced with the unknown and the unknowable? How do we react? What do we become? That’s the mystery.

PICNIC AT HANGING ROCK had a profound effect on me. I’m a mystery writer, and solutions are part of what I do. This film is one of 10 films I list when I’m asked about the nature of reality. Murder mysteries “solve” life’s problems, but some works of art do the opposite—they pose challenging questions.

Here are my 10 favorite “reality check” movies in chronological order:

All of these films are intellectually challenging, and people have been discussing them and arguing about them since they first appeared. But PICNIC has a special place in my heart because it actually affected my writing. It gave 23-year-old me ideas about how to tell a story that I’ve never forgotten. The most profound truths aren’t always spelled out in black and white—the “gray area” can be the most interesting part of the story. In PICNIC AT HANGING ROCK, it is the story.