As much as I enjoy finding new mystery and suspense authors, there’s nothing quite like revisiting old friends. I recently reread several titles of two favorite authors who dominated the bestseller lists back in the Stone Age, when I was a teen dreaming of someday being a writer. Is it any wonder that they both had an enormous influence on my own, personal style as it evolved? 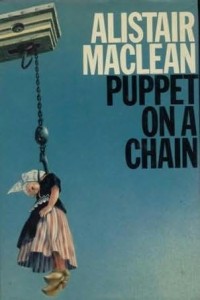 First up: Alistair MacLean. He’s the guy who wrote THE GUNS OF NAVARONE, ICE STATION ZEBRA, and WHERE EAGLES DARE. In addition to being bestselling novels, all three were hit movies that I watched over and over (and now I own them on DVD). They’re probably his most famous works, but he wrote nearly 20 others, many of which are just as good. I revisited PUPPET ON A CHAIN (a Dutch agent versus drug smugglers in Amsterdam) and BEAR ISLAND (sabotage and murder on a film set near the Arctic Circle). Old-fashioned? Sure. But MacLean knew how to tell a fast-paced action tale better than just about anyone else. The no-nonsense, do-the-job-and-get-out quality of his rugged adventure stories is a perfect lesson in narrative economy. Bonus trivia: The leading ladies in most of his books are named Mary, or Marie, or Maria. Why? Because his wife’s name was Mary. You have to love a writer who uses his spouse as the prototype for all of his heroines. 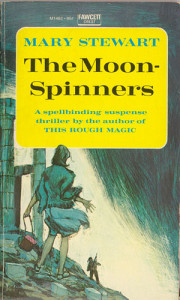 And then there’s Mary Stewart. My late sister worshipped this wonderful British author, the “queen of romantic suspense,” and she insisted I read them. I wasn’t so sure–Stewart’s paperback covers in those days featured terrified women running out of mansions in nightgowns, and they looked distinctly “girlish” to me–but this was the older sister who turned me on to Daphne du Maurier, so I listened to her. She told me that one of Stewart’s books was THE MOON-SPINNERS, the basis of a Disney/Hayley Mills movie that had recently thrilled us at the local movie theater’s Saturday Matinee. (Do they still have Saturday Matinees for kids in movie theaters? Just wondering.) I grabbed my sister’s copy of THE MOON-SPINNERS and read it, and it was better than the movie. The book was written for grown-ups, and the heroine was in much scarier trouble than Hayley Mills. And she didn’t scream all the time like Hayley did in the movie–she was actually very resourceful.

Before she became world-famous for her books about Merlin and King Arthur, Stewart wrote 12 bestselling romantic suspense novels. They all cleave to a simple formula: A lovely young Englishwoman goes to an exotic place and finds romance and life-threatening danger. THE MOON-SPINNERS takes place in Crete, and her other locales include southern France, northern England, Austria, the French Pyrenees, Corfu, and the Isle of Skye. Stewart’s elegant writing style makes all these settings come alive before your eyes. And, unlike a lot of her competitors, she always allows her leading lady to be a strong, intelligent type who usually manages to extricate herself from peril without relying on the resident hunk. In fact, the girl frequently saves him! Like Alistair MacLean’s books, her titles are a bit dated (no electronics, and everybody smokes like chimneys), but she manages to keep the strong suspense going from first page to last.

These two wonderful authors are (still) among the best in suspense, and they’re both back in print now. If you haven’t read them, try them.

2 thoughts on “Oldies But Goodies: Alistair MacLean and Mary Stewart”