Here are two more in my continuing series of “Stuff I Think You Should Know About.” As usual, I’m spotlighting a book (new) and a film (oldish). So… 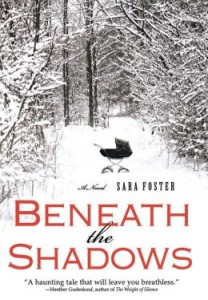 The new book is BENEATH THE SHADOWS, a nifty Gothic-style suspenser from Australian author Sara Foster. She’s written 3 novels so far, but this one is her American début. A young couple and their newborn baby girl move north from London to a remote Yorkshire village when the husband, Adam, inherits a cottage from his deceased grandparents. The wife, Grace, barely has time to get used to the culture shock of moving from the big city to, um, Nowheresville, when Adam suddenly vanishes from the face of the earth. No clues, no body, and the local cops (and everyone else) assume he’s changed his mind about marriage/parenthood and taken a powder. One year later, Grace returns to the village to find some answers. What she finds are unwelcoming locals, weird sounds in the night, stories of ghosts haunting the moors, and a grandfather clock with a mind of its own. Is she losing her grip on reality? Is the village really haunted? And what, exactly, has happened to Adam? Foster doesn’t break any new ground here, but her clear style and obvious love of the snowy British landscape are hard to resist, not to mention the way she manages to fit every Gothic literary convention you ever heard of into one tight, surprising narrative.  If you cherish your memories of WUTHERING HEIGHTS and REBECCA, among others, try it. 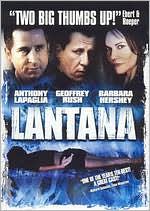 The movie is also from Australia, and it’s one of my favorites. LANTANA (2001) is a dazzling Chinese puzzle box of a film, with a plot at its center that may–or may not–be a murder mystery. But who has been killed, and how? Well, that’s the mystery, and they take their sweet time letting the viewer in on these facts. A disparate group of near-strangers plays “Six Degrees of the Unknown Dead Woman” in a small Aussie city, including a police detective/cheating husband (Anthony LaPaglia), his unhappy wife (Kerry Armstrong), a celebrity psychologist (Barbara Hershey) and her mysterious husband (Geoffrey Rush) who are mourning the long-ago murder of their daughter, the detective’s love-starved fellow cop (Leah Purcell), and his casual mistress (Rachael Blake), who’s obsessed with him and with her creepy next-door neighbor, who may or may not be the killer. As their paths cross in surprising ways, we really get to know all these people and their various problems, hopes, wishes, and dreams. And it all comes together in a devastating final section. A mystery in several senses of the word, this film by Ray Lawrence is based on a hit Aussie play by Andrew Bovell, who adapted his own work for the screen. FYI: the title word, lantana, is a luscious tropical vine that grows around and under other trees and bushes, invisibly tying them together–and sometimes choking the life out of them–which pretty much describes this terrific mystery.

Okay, that’s 2 more recommendations for you. The book is a new hardcover from St. Martin’s Press, and the film is on DVD/Blu-ray/etc. Enjoy!

2 thoughts on “Off the beaten path #3: the Down Under edition”