I’m reading the current #1 bestseller in the mystery/suspense genre, GONE GIRL by Gillian Flynn. Reading the “hot mystery of the moment” got me thinking of my lesser-known fave mystery books and films, the ones I reread/rewatch and recommend. I’m occasionally going to spotlight some of them here, and I’ll start with one of each. 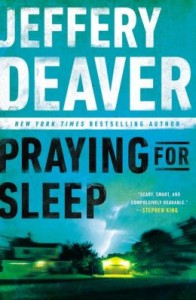 The book is PRAYING FOR SLEEP by Jeffery Deaver. As a bookseller at Murder Ink®, I was frequently asked to recommend a “perfect” suspense novel, and I always handed the customer this book. Deaver is a terrific writer, as vivid as he is economical, and he’s a master of story structure. That may not seem like a big deal, but, believe me, any writer who’s tried to create a suspense novel knows what I’m talking about here.

The story couldn’t be more simple: An insomniac woman in an isolated New England house is waiting for her absent husband to return home. Elsewhere, a huge, violent inmate at a prison for the criminally insane manages to overpower his guards and escape. The woman is informed of this. These things occur one dark-and-stormy evening at about 6 o’clock. We soon learn that the woman is the reason the man was incarcerated–she testified at his murder trial years ago–and he has escaped for one reason only: to find her. The ensuing 400+ pages cover the next 12 hours in excruciating, breathtaking detail. The storm rages, cutting off roads and phone lines. The sleepless woman waits. Her husband and various authority figures desperately try to reach her. The hulking, superhuman monster gets closer and closer. And the clock is ticking. By the time he arrives, the tension is almost unbearable, and then it’s one big surprise after another.

Deaver is a bestselling author known for his popular Lincoln Rhyme series (Denzel Washington played the quadriplegic detective in the 1999 movie, THE BONE COLLECTOR). I like Lincoln Rhyme, but I have a special affection for this perfectly constructed stand-alone thriller from 1994. If you like gripping, fast reads, this is a must. And if you’re a writer who wants a crash “how to” course in creating and maintaining suspense, here it is. Try it. 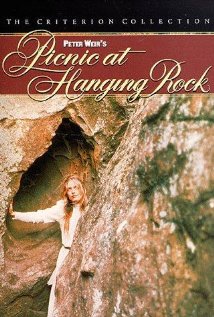 One of my favorite mystery films isn’t really classified as a mystery fim, but that’s exactly what it is. Peter Weir’s PICNIC AT HANGING ROCK (1975) is a quiet, deliberately paced story of a Valentine’s Day outing at a girls’ boarding school in the Australian Outback in the year 1900. On that day, the girls and teachers travel to a national monument, a phenomenal volcanic mountain surrounded by miles of flat wilderness. During the picnic, 4 girls decide to explore the lower slopes of the mountain while the others remain at the base. Only 1 girl returns hours later, and she doesn’t know where the others are. The teacher who goes to find the 3 missing girls disappears as well. A huge search is mounted by local and national police, but the teacher and the 3 girls are not found. Then, days later, a young man who’s become obsessed with the case is searching the mountain again, and…well, see for yourself.

As I said, not a mystery, exactly, and yet it is. Peter Weir, the brilliant Aussie director of THE LAST WAVE (1977) and WITNESS (1985), based his first major film on Joan Lindsay’s novel (also excellent), and it is about nothing less than the mystery of the human mind–our reaction to the unknown. Weir’s focus is not on the victims but on the survivors, the various teachers and girls and local residents, and that haunted young man. What happens to us–to our minds and emotions–when faced with questions that have no answers? And what does that do to our own lives? The repercussions of the incident at Hanging Rock go on and on. I’ve introduced a lot of people to this film over the years, and they always thank me for it. Next time you’re looking for something different–what we call “food for thought”–see what you think of it.

So, those are my first 2 buried treasures. I’ll have more later.