I love the Criterion Collection, and here are two reasons why. These are my reviews on Amazon (where I’m a “Top 1000” reviewer), and I explain why I love this wonderful DVD/Blu-Ray company in the text. So… 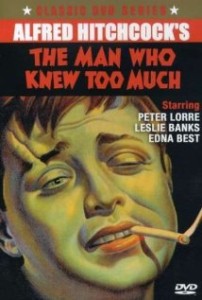 The Criterion Collection has done it again! For several years now, they’ve been filling in the blank spaces in the collections of film lovers, and now it’s a newly remastered version of Alfred Hitchcock’s 1934 thriller, THE MAN WHO KNEW TOO MUCH. As one of Hitchcock’s biggest fans, I’m here to tell you that there has never been a really good print of this early masterpiece available on DVD before, to say nothing of Blu-Ray. Now, thanks to Criterion, we have both!

This was Hitchcock’s first version of the venerable spy story; he filmed it again in 1955 with James Stewart and Doris Day. Fans argue about which is the better version, and the director himself preferred the later one, but I love them both equally. There’s something truly charming about the earlier film, and it includes one great performance that doesn’t have a correlative in the 1955 version.

The story is simple and straightforward: A British couple (lLeslie Banks and Edna Best) are on vacation in Switzerland with their young daughter (Nova Pilbeam) when the father accidentally learns a deadly secret from a dying man. A political VIP is about to be assassinated in London by a nasty ring of terrorists led by a vicious psychopath (Peter Lorre, giving the great performance I mentioned above). In order to keep the parents quiet about the plot, the villains kidnap the daughter. It’s up to the intrepid father and the surprisingly capable mother to rescue the girl and thwart the assassination. This involves a wild chase around London, culminating in one of Hitchcock’s most celebrated set pieces, the famous concert sequence at the Royal Albert Hall, where Edna Best agonizes over what to do–if she saves the VIP, the gang will kill her child. The scene is only about 3 minutes long in the original (it’s 12 excruciatingly suspenseful minutes in the remake), but it’s very effective. Then comes a tense standoff, a shootout, and…well, see for yourself.

This was Peter Lorre’s first performance in English, and he is truly memorable. Banks and Best are excellent, too, and the swift pace of the movie never lags. It’s one of the Master’s most enjoyable early works, paving the way for later gems like THE 39 STEPS and NORTH BY NORTHWEST, and now Criterion has given us a reason to appreciate it even more. Highly recommended. 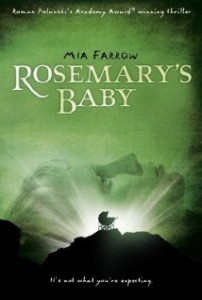 Roman Polanski’s 1968 film version of Ira Levin’s bestseller is one of the finest horror films ever made. Polanski adapted Levin’s terrifying novel of ancient evil in a modern setting with every thrill intact. He filmed on location in NYC, and he somehow managed to convey a sense of claustrophobia and quiet panic on busy streets and sidewalks. To create suspense is very difficult; to sustain that suspense for 2 hours and 16 minutes is all but impossible. But he did it, with the help of excellent photography and production design, a wonderfully creepy musical score, and a terrific cast. Mia Farrow is simply magnificent as Rosemary, and she’s matched by John Cassavetes, Sidney Blackmer, Maurice Evans, Oscar-winner Ruth Gordon, and an A-list of Broadway veterans. From start to finish, it is a perfect film.

Like so many other great movies, ROSEMARY’S BABY was suffering the ravages of time, and earlier VHS and DVD releases prove it. The print was fuzzy, the colors were faded, and the sound had a muffled, indistinct quality. Now, the wonderful folks at the Criterion Collection have done something about it. The picture and sound have been newly remastered from original materials, and they’ve added a lot of extras as well. I’m very grateful for the Criterion Collection–they’ve already rescued and improved hundreds of classic titles, and they’re still going strong. ROSEMARY’S BABY is the latest addition to an impressive list of Criterion gems on DVD and BluRay. On behalf of film fans and collectors everywhere, I thank them.

PS: Polanski is still going strong, too. If you haven’t seen THE GHOST WRITER yet, check it out. It’s another perfect thriller.

Okay, film buffs, if you have a DVD collection that includes all the best mystery and suspense movies, you need to add both of these titles immediately. Enjoy!