The Criterion Collection has done it again! This incredible company has been restoring and refurbishing hundreds of American and international films of the past and present, making them available in truly superior DVD/Blu-ray formats. I’ve blogged about them before (they recently released ROSEMARY’S BABY and Hitchcock’s original 1934 version of THE MAN WHO KNEW TOO MUCH), and I’m sure I will again. This time, the big news from Criterion is the long-awaited (by me and a lot of other people) release of the very first DVD/Blu-ray versions of one of the greatest ghost stories ever: Lewis Allen’s gorgeous 1944 classic, THE UNINVITED. It’ll be out this October–just in time for Halloween!–and I’ve already ordered my copy from Amazon, where I posted a rave. I reprint it here for followers of my blog:

I swear, I think the folks at the Criterion Collection have bugged my house. Every time I look at my shelves of DVDs and Blu-rays and notice that some personal favorite is missing because there isn’t a decent video version available, Criterion immediately announces that the movie I wished for is being restored and released by them. They recently performed this magic trick with beautiful upgrades of ROSEMARY’S BABY and my favorite Kurosawa films, and now they’ve announced my favorite ghost story of all time! They’re promising a restored print, commentary, a glossy Criterion booklet–the whole package we’ve come to expect from this excellent company. 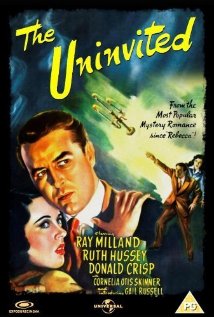 THE UNINVITED is simply stunning, a sophisticated thriller with great photography, fine performances (Ray Milland, Ruth Hussey, Cornelia Otis Skinner, and the beautiful, tragic Gail Russell as the haunted Stella), and a memorable musical score by Victor Young that’s highlighted by his most famous theme, “Stella By Starlight.” A big old mansion on a cliff, an old family scandal, a terrified young girl, and things-that-go-bump-in-the-night add up to one of the most enjoyable scary movies ever to come from Hollywood. It’s usually mentioned by film historians as the first important ghost story from a major American film studio that takes the subject matter seriously. When it comes to ghost movies, it’s right up there with UGETSU, THE INNOCENTS, THE HAUNTING (1963–not the awful 1999 remake), DON’T LOOK NOW, and THE DEVIL’S BACKBONE in intelligence and quality. I’ve seen THE UNINVITED many times, and I’m glad I can finally retire my worn VHS tape and replace it with a Criterion disc.

It’s impossible to overstate the importance of the Criterion Collection to film collectors and students. Their ever-growing catalog of the best American and international films is a real service to us, and to film history. Thanks again, Criterion, and keep up the good work. I–for one–will keep buying them!

That’s my review. As you can gather, I’m totally geeking out over this. Pre-order your copies now–whether you’re a fan like me or have never seen or heard of THE UNINVITED until this minute, you’ll thank me for it. Enjoy!