Today is August 13, the birthday of Alfred Hitchcock (1899-1980). It is the 113th anniversary of his birth, and I’m sure the great man himself would have been amused by the double appearance of that “unlucky” number. By all accounts, he loved things like that. Well, I love his movies, so I’ve selected my 13 favorites of his films for my latest list of Essential Mystery Stuff, a “baker’s dozen” to honor his birthday. In chronological order: 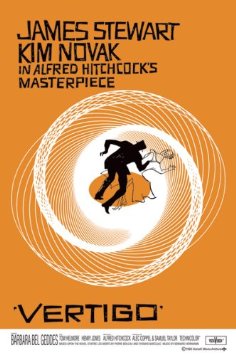 The re-release poster for VERTIGO by the great Saul Bass

Hitchcock made 53 theatrical films, and the other 40 ain’t bad, either. I even love the ones I don’t really like (UNDER CAPRICORN, MARNIE, FAMILY PLOT). The plain fact of the matter is this: He knew what makes us nervous, and he knew how to capture that onscreen, perhaps better than any other director, before or since. He pioneered a lot of techniques that are now so prevalent in filmmaking, they’re regarded as clichés. He was one of the first directors to use voiceovers, point-of-view shots, long tracking shots, flashbacks, and dream sequences, and he put his individual stamp on all of them.

His single greatest contribution to cinema is definitely the “Hitchcock sequence,” that long suspense scene that starts quietly, then slowly builds to a crescendo of action and surprise. All 13 films listed here have at least one instance of this. (Great party game: get a gang together, show some of these titles, and find the “Hitch sequences.” The first person to identify one makes everyone else do something silly with lampshades, or whatever.) 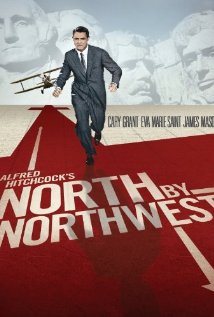 The most famous “Hitchcock sequence” is the crop-dusting episode in NORTH BY NORTHWEST, where Cary Grant has a close encounter with a menacing, entirely illogical small plane. And it is illogical; even the film’s screenwriter, Ernest Lehman, admitted this. If you were an international spy who needed to kill the pesky Grant character as quickly as possible, would you go to all the trouble of luring him to an isolated place, miles from anywhere, and hire a stunt pilot to swoop down and shoot at him from the sky? I mean, really! A single, clean shot/stabbing/poison pill on the train, or at the U. N., the house on Long Island, or the Plaza Hotel would have done the trick. But Hitchcock wasn’t interested in logic so much as emotion. He begins with that gorgeous long shot of the entire cornfield and highway, then moves in on Grant and builds–slowly, slowly–to a fiery climax. By the end of his 9-minute ordeal, we are as shaken and exhausted as Grant. Whether or not it makes a lick of sense (and it doesn’t), we wouldn’t want it to be any other way.

There are other examples of this signature device in Hitchcock: Judith Anderson whispering to Joan Fontaine (“Look down there…”) and goading her to commit suicide (REBECCA), Joel McCrea in that sinister windmill (FOREIGN CORRESPONDENT), Robert Walker desperately trying to retrieve an incriminating cigarette lighter from a public drain (STRANGERS ON A TRAIN), the dialogue-free 12-minute Royal Albert Hall episode ending in Doris Day’s anguished scream (THE MAN WHO KNEW TOO MUCH), James Stewart silently following Kim Novak all over San Francisco (VERTIGO), and, of course, Janet Leigh’s brief tenure at a certain motel (PSYCHO). And those are just in the films I included here–there are plenty more where they came from.

My favorite line in NORTH BY NORTHWEST is “Goodbye, Mr. Thornhill–wherever you are.” I’ll end this post with a paraphrase: Happy Birthday, Mr. Hitchcock–wherever you are. And thanks for the memories.