I seem to be very busy all of a sudden. This is one of those weeks that creep up on you, and afterward you wonder how you managed to get through it. I’m about to start my second day of jury duty down at 60 Centre Street. Loooong day there yesterday, so we’ll see what happens today. Tonight I’m going to the annual Agents and Editors cocktail party given by the Mystery Writers of America. Tomorrow night is the Edgar Awards. And if I get out of jury duty in time, there’s another party tomorrow afternoon, another annual tradition, this one hosted by Dell Magazines. They’re the company behind Alfred Hitchcock Mystery Magazine and Ellery Queen Mystery Magazine, two publications to which I frequently submit short stories. Friday is dinner with my weekly Friday Night Club, and at some point I want to visit a friend in the hospital (one of the FNC members). 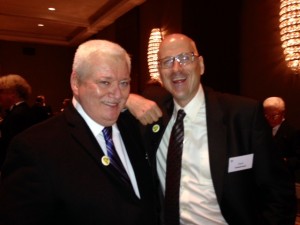 At the Edgar Awards 2014 with my editor, Dana Isaacson (photo by author Laurie R. King)

Meanwhile, I’m putting the final touches on A Penny for the Hangman, my new novel for Random House’s new Alibi line that will be published in October (I’ll have more on that process soon). And I’m writing a new novel. I just began it a couple of weeks ago, and I’m trying to work up the crucial momentum and rhythm for getting that underway. All of this is augmented by the time I’m stealing to immerse myself in the book I’m currently reading, The Goldfinch by Donna Tartt. (More on that later, too.)

And it’s only Wednesday.

I’m not complaining. We all have weeks like this, and most people have them a lot more frequently than I do. But it’s interesting how these sudden flurries of activity arrive, seemingly out of nowhere. “It never rains but it pours”–I finally understand that old saying. And I know why it’s an old saying in the first place. Because it’s absolutely true.

3 thoughts on “It Never Rains…”