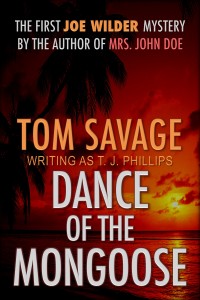 “I’ve been trying to imagine the murder scene. It probably went something like this...”

So begins the chronicle of Joseph Wilder, a struggling New York City writer whose approach to criminal evil is strictly literary—until a trip to his hometown in the Virgin Islands becomes his first case as a detective.

When he receives an urgent message asking him to return to St. Thomas, Joe goes home immediately. His oldest friend’s father, a judge with political ambitions, has been brutally murdered, and his friend is suspected of the crime. Back among family and childhood acquaintances, Joe soon learns that everyone he knows had reasons for wanting the judge dead, and someone he knows has made it happen. When he tries to untangle the web of secrets and lies surrounding the case, he remembers the old West Indies legend of the mongoose, possessed by the power to drive away evil: It is said that when the mongooses killed the last snake on the island of St. Thomas, they danced in victory by the light of the moon…

Joe Wilder may not have the same mystical power, but he’s determined to find the snakes in this case and drive them out—even if victory means putting his own life in danger.

“A sensual novel of misplaced passions and forgotten dreams. Joe Wilder is a welcome addition to the private eye elite. This is crime fiction at its riveting best.” — FAYE KELLERMAN

“What more could you want? An exotic location, an intriguing puzzle, mysterious characters, and an engaging, if reluctant detective. Dance of the Mongoose delivers all this and more. — PETER ROBINSON