It’s that time of year again… 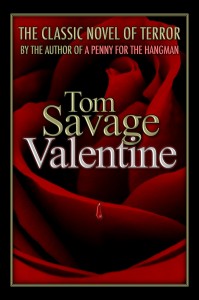 February 14 is an important day for me. On this day in 1996, my third novel, VALENTINE, was published by Little, Brown. Exactly one year later, the Signet paperback arrived. And February 14, 2001 was the date for the premiere of the Warner Bros. film version.

Every year since then, there’s usually a little spike in sales of the book around this time, and the movie inevitably fetches up on various cable and pay-per-view channels. The book is out of print at the moment, but the ebook version is available in all the usual places. Next year will mark its 20th anniversary.

I remember writing VALENTINE. I remember the first draft, and the second one, and the third, which is the one I finally sent in. I definitely remember the 5-page, single-spaced set of notes I received from my editor, Fredrika Friedman. She walked me through the story, suggesting changes and improvements. I think I learned more in that process than ever before about the sheer craft that goes into creating a novel. I learned some basics from Fredi that I still use every time I sit down to write. As grueling as the experience was, it was also exciting, and ultimately rewarding. I can only hope that every writer I know has at least one similar experience. There’s nothing like it. 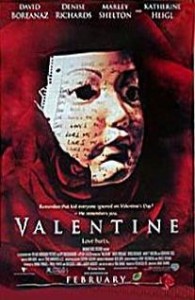 My research for the novel was fascinating. Among other things, I learned that my titular villain, Victor Dimorta, is not a serial killer; he’s a series murderer. What’s the difference? Well, according to the FBI, a serial killer chooses random targets that match a certain prototype, whereas a series murderer like Victor stalks a specific list of people. I also learned more than I ever wanted to know about the backgrounds and childhoods of these charmers. Crime and mystery writers are always finding out such interesting things!

VALENTINE was my biggest success. It even made a couple of national bestseller lists, and the movie tie-in reprints didn’t hurt, either. Click on the ebook image for a synopsis and reviews, and if you click on the movie poster, you can read my personal thoughts about the 2001 film version. Every year at this time, I’m grateful for that tense story of an obsessed madman and the brave woman who refuses to be his next victim. I mean, If that doesn’t put you in the mood for the international day of love, what will?

So, as Victor Dimorta always whispers just before he strikes: “Happy Valentine’s Day!”

3 thoughts on “A Very Special Day”