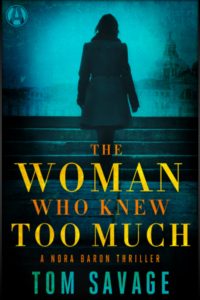 Nora Baron is back! When the CIA helps a defecting Russian actress in Venice, the op turns deadly in this white-knuckle thriller from the bestselling author of Mrs. John Doe—proving once again that, in the words of James Patterson, “Tom Savage knows the mystery novel inside and out.”

Galina Rostova, the hot new star of Moscow’s theater scene—and mistress to a powerful Russian general—has reached out to the CIA. In exchange for information vital to U.S. security, she requests asylum in America. The Company’s top pick for the mission is Nora Baron. The wife of a CIA operative, this Long Island mother and drama teacher has proven to be an asset in the field before. And as an actress herself, her cover will be convincing.

Disguised as a television news host, Nora heads to Venice, Italy, where Rostova is appearing in Chekhov’s The Seagull. As the cameras roll during their mock interview, the starlet will make her escape—or at least that’s the plan. But when the defection goes off-script, the two women are on the run from Russian agents. And when a snowstorm buries Venice, clogging the streets, waterways, and airport, the stage is set for tragedy—with several lives at risk of a final curtain.

“A clever, compelling, and cinematic page-turner in which nothing is as it seems, Mrs. John Doe opens with a twist I didn’t see coming and closes with a satisfying bang.”—New York Times bestselling author Wendy Corsi Staub

The Spy Who Never Was

The Devil and the Deep Blue Spy