Good news for everyone who loved last summer’s thriller, BLOOD OF THE LAMB by Sam Cabot: The second novel in the paranormal thriller series, SKIN OF THE WOLF, is here!

Livia Pietro and Father Thomas Kelly have left Rome for New York City, where they’re soon joined by their friend, Spencer George. If you don’t know who these three detectives are, you should. I’ll give you a tantalizing hint: Only one of them is, um, mortal. And that’s the fun in this particular series. In the first book, an old document that involved the Roman Catholic Church led our protagonists to some shocking discoveries about a group called the Noantri–what we, in English, would call vampires. Now, in SKIN OF THE WOLF, they’re on a case that involves an old American Indian ceremonial mask, a murder at Sotheby’s auction house, and a group of Native Americans who are not unlike the Noantri. They’re just from a different, um, strain of supernatural beings. (The book’s title will give you a big hint!) Livia, Thomas, and Spencer must stop them before…well, find out for yourself. 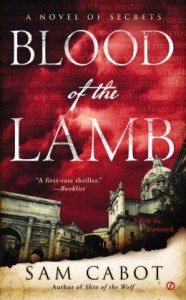 As you may already know, “Sam Cabot” is the pen name of two people, university English professor Carlos Dews and multi-award-winning mystery writer S. J. Rozan. Between the two of them, they have a prodigious knowledge of cultural history and mystery writing, and the resulting novels are absolutely terrific. I loved the first Sam Cabot thriller, and I think I like SKIN OF THE WOLF even more. I recommend both books, and you should read them in order. BLOOD OF THE LAMB is now available in paperback. Sam Cabot also has a really neat website with lots of info about the world of the books (and how to order them). For the Sam Cabot site, click here.