This is a difficult post for me to write. On the one hand, writers who have new books coming out should be grateful for early reviews and word-of-mouth, especially if the word is positive. And we are–we really, really are. On the other hand, there’s a great big elephant in the room, and it’s time to mention it. Since no one else is stepping forward, I suppose that task falls to me. 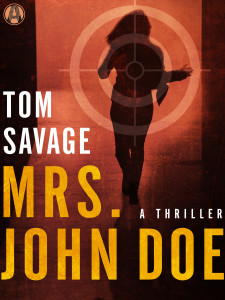 I write suspense thrillers, stories that depend almost entirely on the element of surprise. Every book I’ve ever published begins a certain way, with a clearly defined story and characters. Then, during the course of the story, everything and everyone are subject to change. My new novel, Mrs. John Doe, is no exception to this rule. It’s an elaborate series of surprises and reversals, with “one damn thing after another” occurring to my hapless title character as she–quite literally–runs for her life. I love this kind of story. My favorite authors are the ones who can always surprise me, and I strive to do the same.

In the old days, only certain industry sources like Publishers Weekly and Library Journal would pre-review new books, while the major media reviews would be timed to coincide with the book’s publication. In our new world of Internet connection and online communities, we have a new phenomenon: instant information. From everyone. Everywhere. Thanks to GoodReads and Amazon’s Vine program, among others, early readers can get the word out about new books. But here’s the thing: These readers are not professional critics.

Because it’s so important, I’m going to repeat that: These readers are not professional critics. In their reviews, they sometimes manage to record the entire plot of the novel, start to finish. This is not cool. For a writer like me and a novel like Mrs. John Doe, it’s downright deadly. And yet, at least three early reviews of my novel have done exactly that. And here’s the weird thing about them: They’re all 5-star reviews. These people obviously liked the book. So why are they destroying it?

Much has been written about the phenomenon of “spoilers,” and there are many opinions about exactly why some people feel compelled to do this. I have my own theory–I think it’s deliberate. I honestly believe there is a certain type of human being who secretly delights in spoiling an experience for everyone else. It’s some odd form of passive/aggressive behavior that I don’t even pretend to understand. But thriller writers–among others–are at their mercy, just the same, and there’s not a damn thing we can do about it.

GoodReads and Amazon have strict policies of never altering or removing reviews, and we all know better than to approach the people in question. I’ve heard lots of horror stories about writers who attempted to do that, and it never ended well for the writer.

So now I’m in an awkward position. On the one hand, I’m grateful for the enthusiastic early reviews of Mrs. John Doe. On the other hand, I hope nobody reads some of them. It took me eighteen months to write it, and it took them eighteen seconds to spoil it. I wish I could say I’m the only writer this ever happened to, but I know better. We’ve all been victims of this bizarre phenomenon. Isn’t that a shame?