Here are two more lesser-known faves of mine, a book and a film. As with my first post on the subject, these are works that can only marginally be called “mysteries,” though they are definitely suspense stories. I recently revisited both of them, and I posted customer reviews on Amazon. I reprint them here for your consideration.

The book is THE SCAPEGOAT by Daphne du Maurier. Here’s my review: 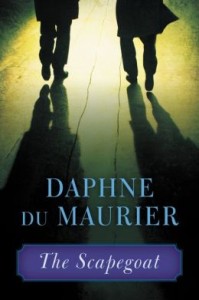 This unusual 1957 novel is one of Daphne du Maurier’s finest achievements. It was also one of her personal favorites. In it, she explored her favorite theme, the one she immortalized in her most famous novel, REBECCA. It is the idea of a good, mild-mannered protagonist replacing–and being controlled by–a glamorous predecessor. In REBECCA, the heroine, “the second Mrs. de Winter,” has no first name. In THE SCAPEGOAT, the hero, “John,” has no last name. This novel gives us a male equivalent of the female original.

While on vacation in France, a lonely English schoolteacher named John meets a wealthy French count named Jean de Gué who is his exact physical double. They talk late into the night, drinking, and John passes out. When he wakes the next morning, he finds that the Comte de Gué has changed clothes with him and stolen his car. His only choice is to go to the man’s chateau, where the count’s all-female family immediately welcomes him. Before he can explain the mix-up and extricate himself, John has become the missing Frenchman–complete with a fragile wife, a precocious daughter, an invalid mother, and two beautiful mistresses, one haughty and the other warm and loving. Not to mention all the money in the world. And he certainly isn’t lonely anymore. But where is the real count, and what is he up to? Why has he trapped his lookalike in his own life and run off to live another one? As John warms to the eclectic group of women around him, he decides to play along with the charade. This leads to secrets, scandals…and murder.

Daphne du Maurier is only now taking her place as one of England’s finest 20th century writers–and it’s about time. She was much more than a “romance writer” or a “lady novelist” or any of the other derogatory things she’s been called, usually by people who haven’t read her books. THE SCAPEGOAT stands alongside REBECCA, MY COUSIN RACHEL, and THE HOUSE ON THE STRAND on the list of the best British novels of that era. It’s fascinating from start to finish.

The film is Billy Wilder’s FEDORA, and I said: 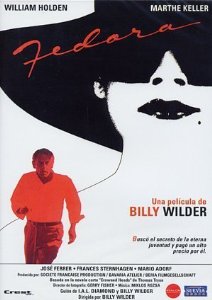 This elegant 1978 film has been described as a “bookend” to Billy Wilder’s other, greater film about old Hollywood, SUNSET BLVD., and it’s a good description. Once more, Wilder has something pertinent–and not very nice–to say about the movie business, and the resulting film is a vivid reminder of his earlier work. It’s also a strong film on its own merits, based on a novella by Thomas Tryon, the former actor who wrote the horror classics, THE OTHER and HARVEST HOME.

A washed-up American producer (William Holden, who starred in SUNSET BLVD. 30 years earlier) comes to Corfu to try to lure Fedora (Marthe Keller), a reclusive, legendary actress along the lines of Garbo, out of retirement for his new film. What he finds in her offshore villa is a mystery: the still-beautiful star is attended by a creepy group of retainers, including a sinister plastic surgeon (José Ferrer), a nasty nurse (Frances Sternhagen), and a wheelchair-bound old Countess (Hildegarde Knef). He offers Fedora the part in the film, and she refuses–or, rather, her entourage refuse for her. Later, she arrives at his hotel, telling him that the people he met with her on the island are holding her prisoner, and she has escaped. If he’ll take her away from them, she’ll make his movie. The retainers arrive to whisk her away, telling Holden that Fedora suffers from delusional paranoia and has spent much of her “retirement” in mental institutions. They claim to be guarding her for her own protection. Holden doesn’t believe them, and he determines to free the star from their influence. His efforts lead to some truly shocking revelations about the woman the world knows as “Fedora,” and to a haunting conclusion for her story.

This was Billy Wilder’s second-to-last film, and by the time it was made he was unable to get American financing for it. It’s listed as a German production, and it was only briefly released in theaters, which is sad. Hollywood has a long, shameful history of turning its back on its own brightest artists when they are considered too old–and too old-fashioned–to make “relevant” films. Well, FEDORA may be old-fashioned in its presentation, but it is hardly irrelevant. Wilder left us with a film that proved little had changed in the 30 years since SUNSET BLVD. Hollywood was still the same snake pit–and Billy Wilder was still one of its finest directors.

So, those are my latest recommendations for out-of-the-way suspense gems. Enjoy!