I remember the first time I read Susan Hill’s now-classic ghost story, The Woman In Black. I was transported to a northern coastal village in England at the turn of the last century, and I was mesmerized by the tale. The novel was published in 1983, and it was soon adapted for TV, radio, and the stage. The play is still running in London’s West End after more than 20 years. I’ve never seen it, but I was interested to see the recent film version. A terrific horror story, a beautiful setting, a good director (James Watkins), and a talented cast led by Daniel Radcliffe: what more could you want? 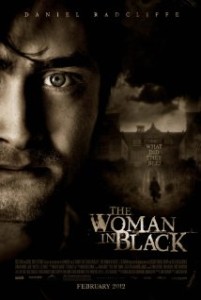 I finally saw the film last night on Showtime, and it’s good. Watkins kept the presentation of the story simple and straightforward, and it’s technically perfect: scenery, cinematography, editing, music, etc. Daniel Radcliffe is quite good as the (literally) haunted protagonist, and the supporting cast is excellent. Still, much as I enjoyed it, I didn’t get the same thrill I got when I read the book the first time, or even the second time, and I wondered why that was. After thinking about it, I have a theory.

In the case of the unknown–like, for instance, a vengeful ghost haunting a remote seaside village and causing terrible mayhem–the mind is more powerful than the eye and ear. As faithful as the film was to the spirit of the original novel, nothing in it is as frightening as Susan Hill’s evocative prose. Imagining a ghost can be scary, whereas watching an actress pretending to be a ghost is not nearly the same experience, no matter how good she is (and Liz White, the actress in the title role, is very good indeed). The best supernatural tales can’t be fully realized in literal terms, no matter how well the artists try.

Watching The Woman In Black reminded me of similar experiences watching film versions of other favorite horror stories. The Haunting, Robert Wise’s 1963 film of Shirley Jackson’s The Haunting of Hill House, and Stanley Kubrick’s The Shining (1980), based on the Stephen King novel, are prime examples. Taken by themselves, they are both wonderful films, and they’ve certainly scared a lot of people over the years. But neither movie is anywhere close to being as scary as the book on which it’s based. Why? Because we can create worse nightmares in our minds than even the best directors can capture on film.

I recommend the movie of The Woman In Black, and you should see it. But you should read the book first. In the thrill department, there’s really no comparison.

3 thoughts on “Book v. Movie: The Woman In Black”